3rd HERITAGE EVENT of Andévalo. from 16 to 18 November 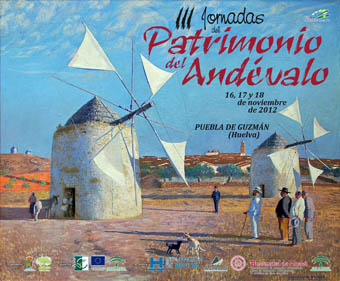 On the 16th, 17th and 18th November and held in Puebla de Guzmán, this was the Third Conference of the Andévalo Heritage, organized by the Association Andévalo Countryside and Puebla de Guzmán town council. The talks, presentations and round tables were held at Workshops of Nature and Ecology from Puebla de Guzmán to the town of Cabezas Rubias.

Alongside these presentations were mounted two painting exhibitions: "Paintings of Andévalo" composed of paintings by artists who have portrayed works of the Andévalo landscape, exhibited in the Hall of Nature, and other "Sebastián García Vázquez in your world” exhibited in the house of the painter and composing of works donated by his family and by the heirs from their homes in Huelva and Sevilla. Also showing were paintings donated by countrymen and neighbours for this event.

Antonio Rodríguez Cruz, known as Antonio de Huelva, delighted us, along with his group, with a lightness of touch on his flute and drum in typical Andévalo style. He was accompanied by keyboard, cello and guitar by his group.

They ended the conference with a tasting of a stew in the Fund House in Cerro del Aguila near the hermitage of the Virgen de la Peña.

Programme of the conference

News of the Year

Alejandro Herrero Allyon, Visionary and Reformer of the Herrerias Mines